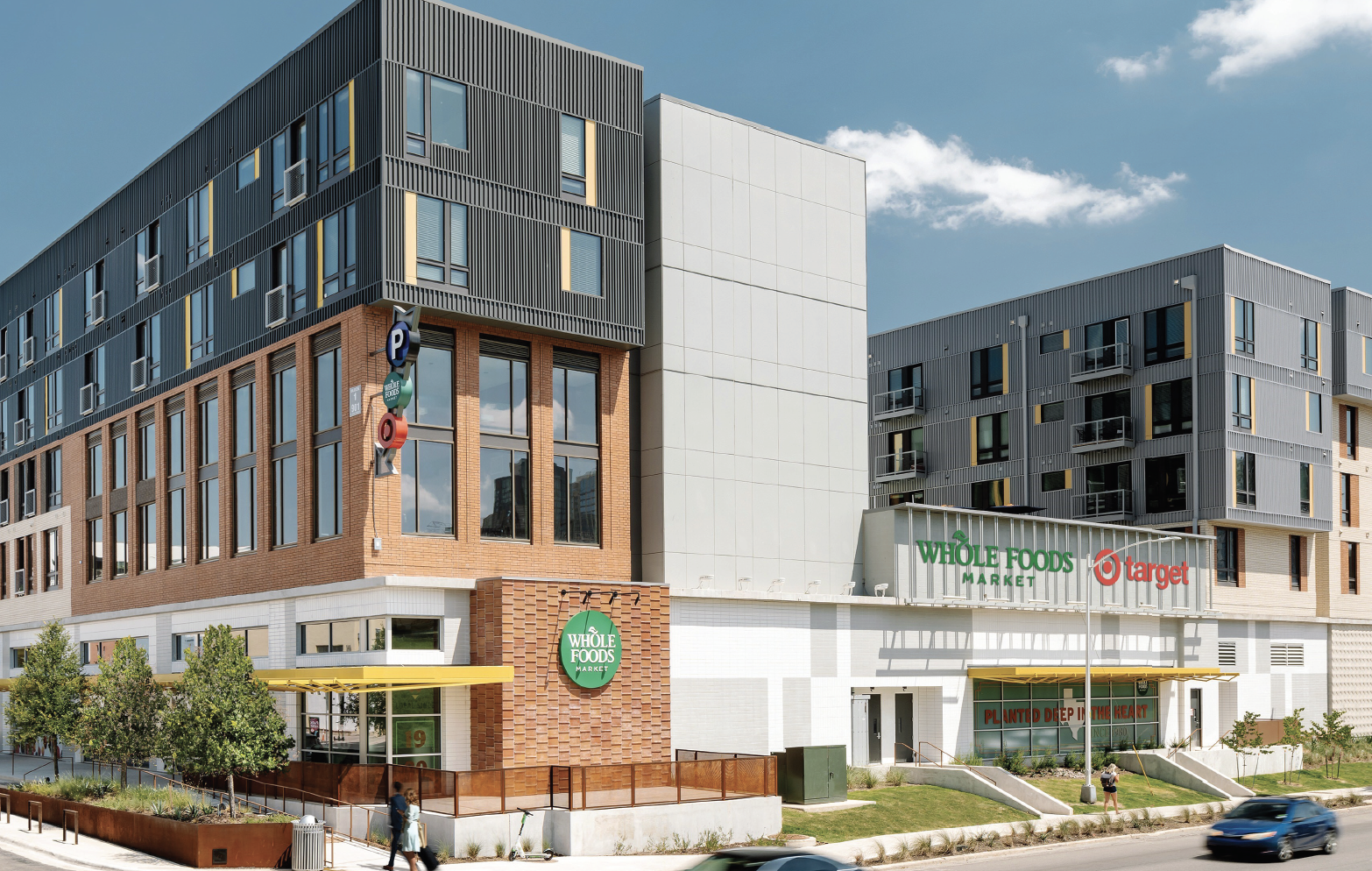 THOUGH MIXED-USE DEVELOPMENTS AREN’T IMMUNE TO COVID-19-RELATED DISRUPTIONS, DEMAND IS LIKELY TO GROW AS THE CRISIS SUBSIDES.

It may seem counterintuitive, but to identify attractive real estate investment opportunities, a great place to look is the past—1908, to be exact.

That’s the year Henry Ford introduced his Model T automobile, the first mass-produced vehicle affordable to the average American, which almost single-handedly determined the layout of the United States. In the century since then, automobiles have been a central factor in the places people choose to live and work, and the lifestyles they lead. Until now.

The digital era has significantly altered the lifestyles and housing preferences of the average American. Those changes have dramatically shifted the real estate investments best positioned for success.

From economic shifts that have normalized dual-income families, to cultural changes that have created a society focused on convenience, multiple factors have driven a return to urban living. As a result, mixed-use communities (MUCs) that integrate residential and commercial space have become extremely popular. And in the wake of COVID-19, demand is only expected to increase.

MUCs are among the most promising real estate investments available today, offering the potential for higher returns coupled with lower risk than many other real estate ventures. Office space within MUCs has been more resilient, according to research conducted by Lionstone, having weathered the 2008 Global Financial Crisis significantly better than single-use properties.

And, though MUCs are not immune from many of the logistical and economic challenges introduced by COVID-19, society’s enhanced focus on physical and mental health in the wake of the pandemic is only likely to enhance demand for such facilities once the crisis has passed.

MUCs consist of a blend of uses within a concentrated geographic area that meet the needs of workers, residents, shoppers, visitors, and even students. Unlike office buildings in central business districts where individuals are densely packed into small areas, however, MUCs provide a more spacious blend of apartments or condos with office space, retail space, and public areas that gather people for a wide range of events.

By allowing people to blend their personal and professional lives into a small geographic area, MUCs ultimately simplify many aspects of day-to-day living and can increase an individual’s quality of life.

In many ways, MUCs also offer a return to the past. Prior to the introduction of Ford’s Model T, transportation options were limited, forcing people to live and work within small geographic areas. But the advent of an affordable automobile changed everything. With automobiles, people ventured farther away from major cities to suburbs promising larger, private living spaces and yards of their own.

With major businesses and companies seeking out inexpensive facilities, and in many cases, the privacy and secrecy that corporate campuses provided for research and development efforts, jobs followed. The resulting landscape became a quilt of decentralized, single-use districts connected by the interstate highway system. This paradigm has dominated the US real estate industry for more than 70 years. But that’s changing.

Single-income families that were once the norm are now few and far between. Today, two income families comprise more than half of the country, representing 63% of married couples with children in 2018, according to data from the US Bureau of Labor Statistics. A population explosion over the past several decades has also nearly doubled the number of people living in the US since the mid-1950s. Roughly 327 million people resided in the United States as of the end of 2018, compared with only 169 million in 1956, according to data from the US Census Bureau.

Meanwhile, technology has chipped away at the once-standard 9-to-5 workday and many employees are now expected to be accessible almost around the clock. As people have become increasingly busy, they have learned to socialize more through digital media.

Age is a factor for the success of MUCs, as well. Younger generations, such as millennials, are less interested in the accumulation of material goods and are instead focused on shared experiences. They are drawn to the environmentally friendly aspects of being able to walk or use public transportation to get to work (a factor likely to become increasingly important, as social distancing highlights the dramatic environmental effect a major reduction of vehicles can have in just a short amount of time). Meanwhile, baby boomers are downsizing and returning to cities, attracted by downsized homes and greater accessibility to goods, services, and social opportunities.

MUCs are able to meet these diverse needs for various generations, while stimulating in-person socialization and collaboration.

MUCs were the predominant form of development before World War II, and there are even examples in the post-war era. Over the following decades, however, interest in such projects fell flat as people gravitated to a suburban lifestyle. Since then, real estate developers and financiers have generally become increasingly specialized in particular product types, such as office, apartments, or retail centers.

Yet, despite a shift that has seen the benefits and conveniences of an urban core lifestyle, the real estate industry has been slow to change course. Single-use focus remains the industry’s predominant mentality, even though it is based on the philosophies of a previous era. The same holds true on the financing side.

While the coronavirus has many people looking at real estate through a new lens—including alterations in office space design, increased ventilation, and convenient and hygienic vertical transportation—MUCs are actually well positioned to weather the downturn.

MUC office space isn’t immune from market cyclicality or downturns, yet it has historically weathered such economic periods far better than single-use office properties. Still, timing is important, and investors need to be aware of how overall economic and market conditions can impact a MUC.

WHERE IS THE OPPORTUNITY?

In 2019, Lionstone’s analytics team compared the performance of 106 MUCs across the US against comparable properties located within a two-mile radius of an MUC. The research found both office space and residential property within MUCs generated significantly higher occupancy rates, rent premiums, and rent growth.

Over a 10-year period, 70% (53 out of 76 properties) of office occupancy rates in MUCs were higher than non-MUCs, while rent premiums were substantially higher than both non-mixed-use office space and residences not located in MUCs.

The ideal MUC is located in a major metropolitan area that is successfully attracting talent for the digital era and accommodates a multitude of transportation options.

But the 2008 credit crisis made clear that many places in the country had fallen behind and are not positioned to catch up. Talent-rich cities such as Manhattan and Houston were quick to rebound from the financial crisis, while cities with less talent, jobs, or public transportation continue to struggle—a gap that continues to widen.

Lionstone’s research also identified specific locations within 17 US cities that are well positioned to thrive in the digital economy. These flourishing innovation-driven ecosystems boast a concentration of highly skilled talent, research universities, and forward-looking governments that are actively investing in environments that can sustain rapid growth and evolution. In aggregate, Lionstone has identified 500 square miles most conducive to attracting the people and companies thriving in the digital economy.

Universities have long been a benefit to their surrounding communities, and they have become even more important in the digital era, where collaboration among multiple organizations is a key factor in many companies’ success.

Of course, just as all cities are not the same, neither are all universities. Those with a high caliber of experts and research located near key cities and businesses can be a huge benefit to MUCs. In some cases, the confluence of world-class research facilities and talent able to generate commercially viable ideas, coupled with nearby entrepreneurs (such as venture capitalists), can foster the equivalent of microeconomic ecosystems able to produce a wide variety of goods. Locations such as Kendall Square in Cambridge, Massachusetts, which benefits from its proximity to the Massachusetts Institute of Technology and Harvard University, have become vibrant economic ecosystems, especially within life sciences, technology, and other areas of innovation at the vanguard of the US economy.

Project size is also a factor for MUC success. Larger MUCs tend to do better because of their ability to both create and foster larger social networks, and to benefit from greater economies of scale. Other critical factors include an appealing and welcoming ground floor with a wide variety of retail options.

In an era where online shopping is the norm, MUCs need to favor local, independent restaurants and one-of-a-kind retailers. Parking must be easily accessible, hidden from view, and able to accommodate mixed usage among residents, employees, and customers. And walkability and safe, clean, public gathering spaces with active event programming are essential.

While investors must choose between new construction projects, or retrofitting and upgrading existing structures, there are benefits to both. Consider Colony Square in midtown Atlanta, an MUC developed in the early 1970s. After people migrated to popular suburbs in the early ’70s, interest in Atlanta’s urban core waned.

But Colony Square’s proximity to the heart of Atlanta and the Georgia Institute of Technology make it incredibly appealing for residential and corporate tenants in a digitally driven economy reliant on a highly skilled workforce. These highlights and the resiliency of MUCs have informed Lionstone’s investment of US$150 million into a renovation project to upgrade Colony Square development, which includes refurbishing its ground floor into an all-inclusive destination featuring restaurants, a movie theater, and outdoor recreational areas.

As we enter a new decade and eventually move beyond the current pandemic, it is more important than ever to employ an analytically driven knowledge of long-term secular trends to determine how to best invest capital in this rapidly changing environment.

Well-designed MUCs in cities that are favorably positioned in the digital economy are in limited supply due to the prevailing development trends of the past 70 years.

But, in a post-COVID-19 environment, we fully expect demand for these projects to remain strong as more people look for a sustainable lifestyle in which they can live comfortably, work productively in the digital era, and easily engage in social activities with friends and colleagues.

Bryan Sanchez is Chief Investment Officer and Hans Nordby is Head of Research and Analytics for Lionstone Investments, a wholly owned subsidiary of Columbia Management Investments Advisers, LLC, that specializes in conceptualizing, researching, and executing national investment strategies on behalf of institutional investors and high-net-worth individuals.