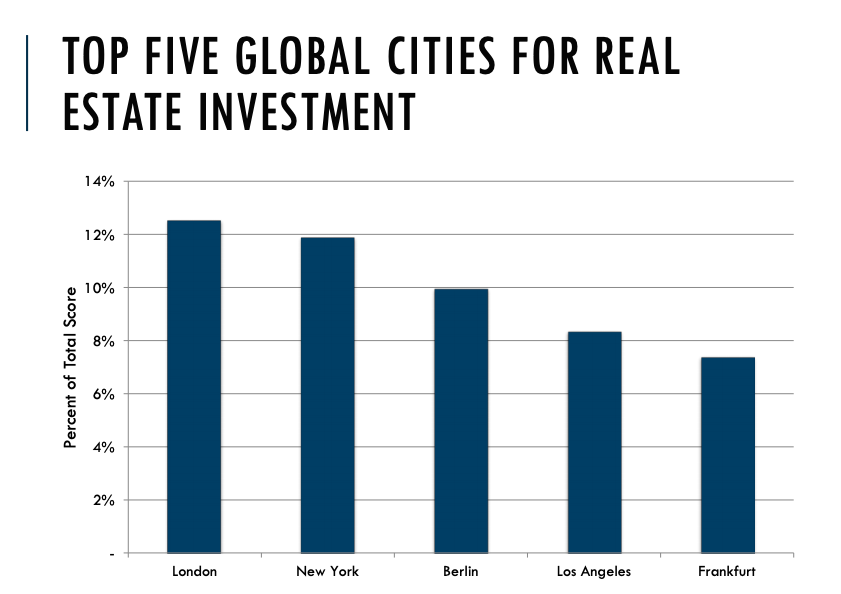 Among foreign investors, interest in New York has slipped and London has assumed first place as the number one global city for their real estate investments. For the first time, Los Angeles has tied New York as the number one city in the US, according to the results of a new survey taken among the members of AFIRE. In last year’s survey, London ranked third globally; Los Angeles ranked second among US cities and fourth globally.

AFIRE members are among the largest international institutional real estate investors in the world and have an estimated $2 trillion or more in real estate assets under management globally. The 26th annual survey was conducted in the fourth quarter of 2017 by the James A. Graaskamp Center for Real Estate, Wisconsin School of Business.

“A year later, foreign investors are less concerned about the ramifications of Brexit,” said, Edward M. Casal, AFIRE’s newly elected chairman, and chief executive, global real estate, of London-based Aviva Investors, explaining London’s rebound. “At the same time, the London market has been buoyed by several large sales over the last year. London has a number of attributes as a location for investment, including a stable rule of law, transparency, and use of the English language. In addition, a favorable time zone for international business, deep labor pool, and cultural attributes also help.” Rounding out the list of top five global cities, in order, are: New York, Berlin, Los Angeles and Frankfurt.

Significantly, San Francisco, which has been on investors’ top five global cities list since 2011, fell into 11th place, and Washington, DC continued its slide among global cities, falling from 15th place last year to 25th this year.

New York had been named the top US city for the last seven years, holding a substantial lead over Los Angeles. As recently as 2014 Los Angeles was in fifth place among US cities. It only moved into second place in 2016. The remaining top five US cities, in order, are: Seattle, Washington, and San Francisco. Seattle moved up from fourth place and Washington rejoined the list after falling off into sixth place last year.

“With the growth of on-line shopping, foreign investors continue to rank industrial and logistics properties as their number one investment opportunity,” said Jim Fetgatter, chief executive of AFIRE. “The cargo coming into the Port of Los Angeles represents 43% of all cargo coming into the United States. Respondents also say on-line shopping is likely to have the biggest effect on real estate over the next five years. With these as benchmarks, it’s easy to see why investors would be bullish on Los Angeles.”

In 2010, industrial real estate was lowest-ranked among leading property types. This year, and every year since 2013 it has ranked first, except for 2014, when it was second-ranked. This year, retail property fell into fifth place; multi-family and office remained in second and third places respectively, and hotels, long in fifth place, moved into fourth.

With 58% of respondents’ votes, the US remains the country considered the most stable for real estate investment. Germany again took second place with 20% of the votes, and Canada remained in third place with 12%. The UK moved into fourth from fifth, while Australia fell from fourth to fifth.  Eighty-six percent of respondents say they plan to maintain or increase their investment in US real estate in 2018.

The US also continues to lead the world in terms of offering the best opportunity for capital appreciation, followed by Brazil, remaining in second place. China and Spain both moved up from a sixth-place tie last year, taking third and fourth places respectively.  The UK fell from third to fifth place.

At the same time, members are cautious, expressing concerns about where the industry is in the typical real estate cycle. They cited concerns about interest rate risks, high valuations, the impact of emerging technologies on retail and other property sectors, oversupply in some markets and property types, and possible economic and political missteps which could affect real estate by triggering an economic slowdown or disruption in the financial markets.

Nonetheless, by a substantial margin, the US was ranked as the number one country for planned real estate investment in 2018 followed by the UK, Germany, Canada, and France. Survey respondents also cited several strengths of the US market including the United States’ strong, stable economy, transparent capital markets, and reputation for innovation. As alternative asset classes they pointed to: senior housing, infrastructure, medical office buildings, and student housing.

For the first time since the question was first asked, two German cities are included among the top five global cities: Berlin in third place, falling from second last year, and Frankfurt, making this list for the first time.