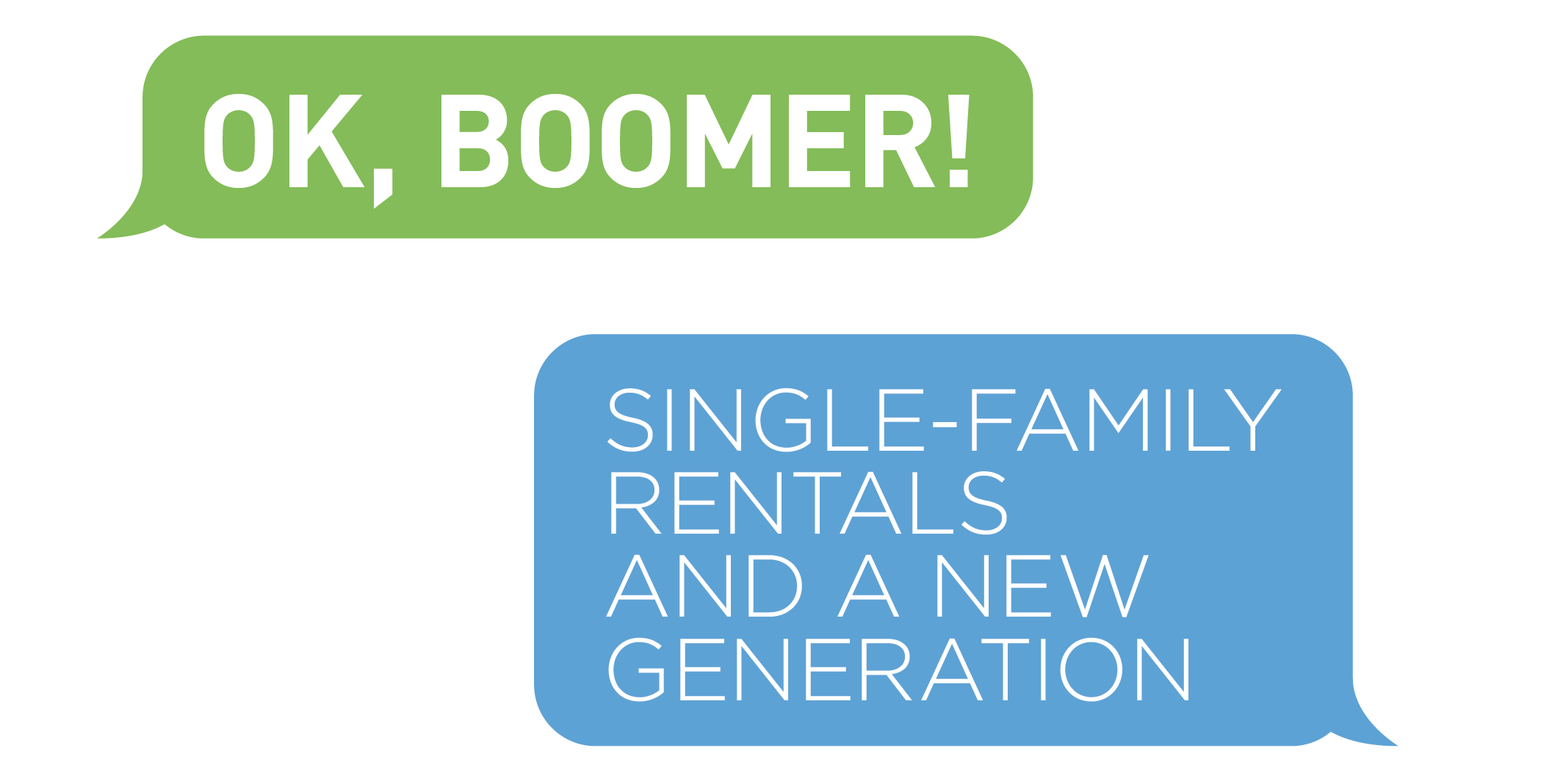 THE DEMOGRAPHIC TRANSITION FROM BABY BOOMERS TO MILLENNIALS SPELLS INCREASED DEMAND FOR SINGLE-FAMILY RENTALS IN THE COMING DECADES. SUPPLY NEEDS TO KEEP UP.

“OK, boomer,” the somewhat condescending term applied by Millennials to those born in the decades after World War II, has morphed into a meme that encapsulates the gulf in priorities between these two very different generations.

“OK, boomer” takes on a slightly different meaning when used in the context of the single-family rental (SFR) market, though. US population growth and demographics trends could indicate increasing SFR demand over the coming decades, and supply may well fail to keep up. Indeed, when it comes to SFR, a new, different boomer generation—millennials who are just now entering the key home-building phase of their lives—is good news for the sector.

A BOOM OF TWO PARTS

The outlook for the SFR sector is positive for two main reasons: population growth and a shift in demographics.

As the population continues to grow, enough new homes need to be built to satisfy demand. However, permit issuance for the construction of new single-family homes has been significantly below the historical average for much of the last decade, after reaching its peak of 1,681,986 in 2005 (Exhibit 1). With 858,910 permits issued in 2019, we are approaching the historical average, although the gap between population growth and new permits is still very large (Exhibit 2).

We expect this shortage of new homes to support continued home price appreciation over the medium term, leading to an ever-greater cost of entry and therefore supporting strong rental occupancy as prospective buyers are priced out of the market. Furthermore, Exhibit 3 shows that occupancy numbers are hovering around the historical average of 94.3%, but are still well below the all-time high of 97.1% in 1978—the peak period of household formation by the baby boomer generation. For comparison, the occupancy rate in the first quarter of 2007—the peak of the housing boom in the US—was a mere 89.7%. As the occupancy rate has increased and new construction has slowed, the pool of available homes has contracted, creating a supportive environment for SFR. A high occupancy rate, all else being equal, should be supportive of rental prices, and while we are around the long-term average, the lack of ongoing construction should support further rental price growth.

While population growth provides a tailwind for the SFR sector, a larger impact on household formation is anticipated from the shift in current demographics. There has been a tendency for Americans to delay major milestones such as getting married and having children. The average age for a first marriage has risen from 23.2 years for men and 20.8 for women in 1970, to 29.8 and 28, respectively, in 2019.[2] Likewise, the percentage of 30-year-olds who are married with children (the prime demographic for the purchase of single family homes) has declined, even as the overall population increases. In 1975, almost 90% of 30-year-olds were married and about three-quarters lived with a child, while in 2015, only 57% of 30-year-olds were married and less than 50% lived with a child (Exhibit 4).

However, it is important to note that we haven’t seen a decline in the total number of Americans in this age bracket. As Exhibit 5 shows, about 23 million Americans are aged 26-34. This large cohort, which has delayed marriage and childrearing, is likely to do both over the coming decade. Thus, instead of an overall decline, we have seen an entire generation simply delay significant milestones, which they are likely to pass over the course of the coming decade.

We could therefore see something of a new baby boom in the US, for which the housing market is ill-equipped to cope. As people get married and have children, they need more bedrooms. Exhibit 6 shows that only over a tenth of apartments have more than two bedrooms, while almost two-thirds of single-family homes have in excess of two bedrooms. It would seem logical that as this baby boom takes hold, millennials will be forced out of multi-family apartments and into single family homes, boosting demand for the sector.

The onset of coronavirus has also impacted the SFR sector: more than a third of US SFR operators have seen an increase in rental demand since February.[3] Could the coronavirus be re-shaping the underlying dynamics of the housing market? We believe the answer is yes—for both the rental and buyer market: while urban apartments offer advantages such as reduced commute times, their location and lack of space has made them relatively less attractive during the lockdown when compared with SFR in our view.

In a post-pandemic world, in which we feel home working is likely to become more prevalent, the larger size, greater distance from neighbors and outdoor space offered by SFR homes could make the sector much more appealing than multifamily, and potentially more resilient than the wider property market.

Even after a decade of growth, momentum still appears to be with SFR. Housebuilding has been below average for much of that time, while pent-up demand, caused by delayed household formation and a growing population, could result in a tailwind for the sector. In addition, the coronavirus may create a trend of moving away from dense urban cores towards the suburbs, further supporting the SFR sector.